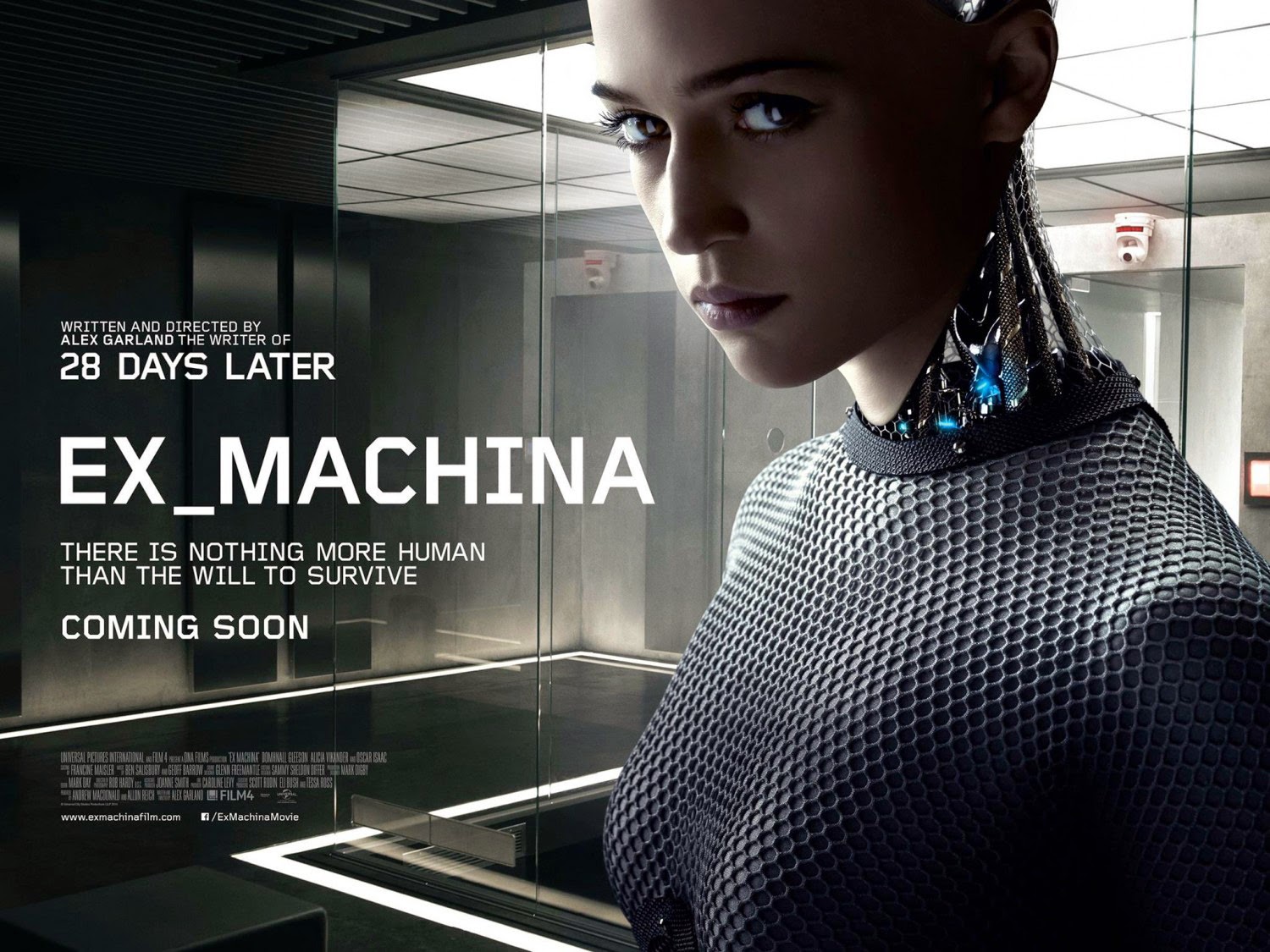 This might seem a bit cruel, but isn't it likely that the first thing that you'd test when you employed a company coder to gauge whether someone seemed real or not, is actually whether said person was so scared of actual alive people -- of actual alive women -- that putting anyone that resembled such before them would cause such a harsh psychic retreat they'd suddenly fantasize a computer "brick" as the most wonderfully receptive of playmates? I mean, isn't that now the most interesting thing about the Turing test? That at some point in time we actually didn't blink at the fact that someone who's life had been all math, and which would evolve all around circuit chips, was casually, readily associated as an arbiter of anyone or anything's degree of true aliveness? Shouldn't it have always been the Shakespeare test? The Yo Yo Ma test? The Bach test? The Gertrude Stein test? Shouldn't it have always been someone we associate with tremendous emotional depth, to become the emblem person we imagine scrutinizing any object's humanity? Surely any of these than "the good guy" -- the good guy who's liable to blush at any pretty woman who responds to him with even pseudo-interest, and who's of course ejaculated to buckets of porn -- some of them, be sure, cartoons.

I think it is. And while I doubt that any geek would come to anywhere near the same conclusion -- irregardless, of course, of IQ -- I'm pretty sure that in the context of what they've been thinking of today, they weren't as ready as perhaps the director might have assumed to jump into the skin of this movie's pro-offered equivalent of them. The director might have assumed that he'd have his audience, that they'd have been humiliated to find their equivalent, their ostensible hero, Domhnall Gleeson's Caleb, ultimately summed-up by the Steve Jobs equivalent in this movie -- Oscar Isaac's Nathan -- as in fact actually only a mediocre, as only an "okay" coder, rather than the best one in the company, and thereafter jubilant to find him turn the tables on him ... ingeniously, and thereafter humiliated for all time by his ostensible love interest's caring not a scat about him once she's ultimately free, bathing herself first in the great outdoors, and then afterwards, in her dream place, probably town-centre New York city. But it's doesn't work out for him, because we're not so much in the mood to be anyone's Charlie of the Chocolate Factory, and are instead thinking on exactly what kind of brew of different things Jobs explored so that when he afterwards reconnected with human life, the guy saw no one else pursuing what he plainly saw as the new frontier before humanity. We don't quite dip ourselves into our geek proxy, because we've been tuned in through the like of Isaacson's "Steve Jobs," that we can't help but be off of him as soon as meet this film's Tony Stark.

I was wondering if I was Tony Stark/Steve Jobs/Isaac's Nathan, would I want his home, his kingdom, of not a quantified number of acres but clearly simply a kingdom? Or would I want the best piece of property in condensed downtown New York, where out to the most refined cafe, I could "people watch"? Do I want to spend most of my time, ideally, like Isaac? Or rather like Eva, the sizeably-breasted, dollish, ostensibly-android love interest, who's name suggests she wants plain fields and plain simple just-human contact, but who out of character actually wants the sublime constituents of urbanity -- to sit before other people, as an especially acute observant, being a flaneur? The truth is, many of us want both -- and so I took the films' pro-offered first-choice of tempting devil, and then readily changed the ignorant ending, where we're supposed to be bathing in then fuming at the young punctuating woman who spurned "us" all for her own glorious turn, to just go along with her, without any of that ... with no sense of later humiliating the spurning, self-interested "bitch" (something, of course, the director will be for-sure be pursing in his later films; watch for it -- this fellow is no feminist but someone setting up women for later loud revenge).

I have little to add, other than I borrowed from the film some "furnishing" tips. One, adding a little Japanese might make feel more excelsior. Two, I need to make running water, streams and outdoor grandeur, more of my future life, however much it reminds me of my mom when she was claiming her rightful glamour. I'll kill her in some way -- rhetorically, I mean, because she is a lovely woman who deserves life to be respondent to her every hope and dream. And then I'll go back there a bit more myself. I love, love, love, a headily running stream, brushed along the side, with the alien encounter of all that couldn't discern me from any other object of wariness.