War is not inevitable 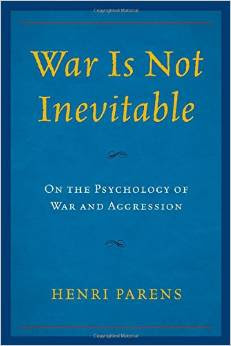 The reason Henry Parens believes that war is not inevitable is that over several years of watching babies with their mothers, he noticed that the intense psychic pain they experience owed to maltreatment, traumas, that lead to enormous rage that would eventually need to be discharged. Abuse leads children, not to develop normal, healthy, primary narcissism—a desire for self-empowerment—but rather hyper-narcissism, where the wound all very young children incur when they realize they aren’t actually vastly empowered but rather small and weak, leads instead to greed, envy and a stark need for power and revenge. Children, who need their parents’ love too much to blame them, and who learn psychic “tools” like displacement and projection within the first two years of their lives, end up as adults finding other victims. If a whole populace has incurred psychic distress as children, and if as a nation they’re suffering from an oppressive regime or a debilitating depression—and especially if the nation has been accumulating a store of hate that hasn’t yet been discharged—you can expect a large war, and perhaps genocide. Exactly what, and who becomes designated the “bad” other, though, will depend on a particular culture’s past history/mythology—if it’s had it in for Jews in the past, this is the way it’ll go once more. He argues that if we can alleviate the pain caused to today’s children, and if we can intelligently temper the diplomatic relations between today’s nations with the influence of psychology, war can disappear.

This book reminded me of Lloyd DeMause’s Emotional Life of Nations in that both works argue that war is born out of widespread early child abuse and both deal with enough political science—with nations, not just mostly personal psychology—that a political scientist might better see it as something they’re supposed to grapple with. The key difference, and what might make it seem less offensive at a time when there’s been a confident rise in the prejudicing of, not just those of who argue that child abuse is widespread—who are in now in common parlance, “witch hunters”—but of the validity of the whole discipline of psychology itself (see this year’s NYT discussion of what happened when influential psychology experiments were redone)—is that Parens believes that most parents unconditionally love their children while DeMause argues that historically rather few have. (Because Parens argues that children learn very quickly to displace blame away from parents, he might acknowledge he thereby makes what might be a sour pill go down much sweeter.) This leaves “childrearing styles” as the culprit, which, one intuits from his discussion of how early societies formed, where everything seems so rational, means he probably thinks they may once of had purpose. One notes too, that rather than, say, widespread sexual abuse of children, his focus is on authoritarian parenting, parental dominion, which is an excess of what children still normally require—direction, resistance, authority. What they fail to give them in love owes to such as being stressed, overworked and tired and therefore unavailable—i.e, the intention to be kind was very much still there: of course they loved their children!

I found much of the book will actually reinforce long-held “truths” so that unconsciously part of its appeal may be that it undeservedly flatters the reader that s/he could so effortlessly grapple with an entirely new way of thinking. He stresses the importance of the first five years of life (even this seems to vary—see below), not just the first two, so that allows him to fairly target the father as the possible primary source of rage, potentially leaving sacred “Mom” mostly unscathed. Hitler, he argues, had a wonderful mother but a terrifying father—and so, in effect, the crime of genocide falls mostly to him! So too was Stalin’s father a tyrant. Since he argues that children learn to blame themselves if they hate their parents, but doesn’t argue that children hate themselves if they self-actualize and become independent—which is a corollary of DeMause’s thesis that many mothers have children not because they love them but because they need them, and therefore withdraw desperately needed support and attention when they begin to individuate—he is spared having to persuade that what causes war are actually prosperous times, especially ripe with opportunity. The true culprits are the familiar ones: oppression, exploitation, economic suffering, which all bring to the fore memories of one’s own suffering in childhood—i.e., what can actually be war-retardants to DeMause’s way of thinking, for their limiting the avenues for self-actualization. You’ll find no discussion of how German nationalism is actually individuals, fleeing self-actualization, throwing away their individuated status and re-bonding as “good boys and girls” with Mother here (he does discuss Mahler and the bond of “oneness” with the mother, but in a brief “detour.”) Instead, you learn that German nationalism was made possible by the fact of centuries-worth of authoritarian parenting, which made Germans susceptible to being bossed around and manipulated to Hitler’s preferences. This isn’t Hitler hypnotizing people—that old canard—but still kind of is: it’s people being induced into a state where they can be forced to be ready pawns for someone else’s directions—i.e., what everyone already “knows” is what happened there. And again it’s a million miles away from DeMause’s “lampoon” argument that Germans in fact made use of Hitler, and would have ignored him if he’d pointed them in a direction they didn’t want to go (so long as they shared the same childhood, to DeMause, pretty much anyone could have been their Hitler!).

So political biography, and much of a whole life (for Hitler he draws attention to his three decades of suffered humiliation, for Stalin it’s his childhood and adolescence) study, is important. And, if somehow centuries worth of hate can explode out at single time—something which is impossible to imagine occurring within an individual but that Parens argues is somehow possible within the group—then certainly careful study of history is. (This too doesn’t follow from DeMause’s work, since if within one generation there’s been significant improvement or regression in childrearing, you’re simply dealing with different people. And to him the choice of one’s enemy at time of war isn’t so much based on heritage as on who best represents the aspects of oneself one is trying to purge—so Jews, not because of heritage but rather because Jews were comfortable self-actualizing in a time of Weimar opportunity.)

Further appealing to current intellectual prejudices is how, despite really seeming to advance a mostly unicausal argument for war—at base, a groups’ childhood is the culprit—it’s “arrival” can at times seem to get really complicated, and even contradictory. For instance, the exact circumstances in Germany in the 30s apparently lead to even fully sane people desiring war and genocide. There’s also no threat that psychology will infuse societal institutions—which most people like to think of as clearly part of an adult, deliberated world— with origins out of childhood: when he talks about the influence of psychology on government he isn’t suggesting the DeMausian correlation between a group’s incurred childrearing and its adult extension, the “exoskeleton”—its political/economic/religious structure—but rather of governments using knowledge of PTSD to assist a traumatized world after WW2, and how we need to see more of that. He does say that Communism doesn’t suit a basic human need, our primary narcissism, but somehow one doesn’t feel impelled to explore this further in regards to specific childrearing, and in fact is made to seem the odd duck.

This was an exciting book to read, and I do applaud it. It’s dense, and worth your while to attend to every sentence and footnote for there might be a compelling adventure there. (On first reading I missed his explanation for why Communism’s a fail, for instance, for thinking I could afford in some parts to scan.) I happen to adhere to a psychological school which places a lot of importance on confronting, but his generous company is a reminder that outside such titanic accomplishments of changing how various principles interact with one another at the UN—one of his hoped-for goals—the widespread company of a book infused with smarts and accumulated life wisdom can tend to our collective psychic distress as well.