So through witchcraft life must be: a review of "The Witch" 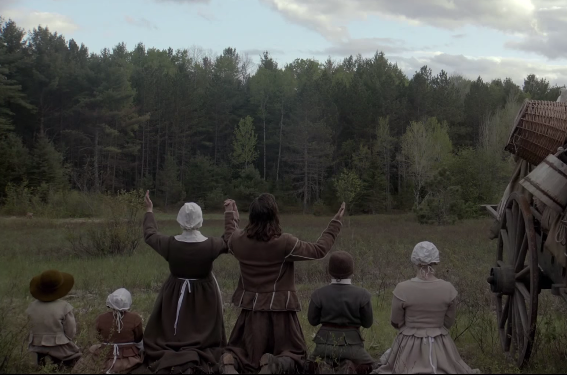 The Witch is about an evolved family, brutally ruptured by an evil so powerful there was nothing they were going to be able to do to master it. Evolved? This absurdly Puritan family? This nutso sin-obssessed family—evolved? Yes. Historically, the Puritans themselves had better parent-child relations than their English kin... they were less intrusive parents, less punishing, and seemed to others like families "stepped out of time." They fled England for Plymouth so to not be swamped by their regressive countrymen. And this particular family flew their Plymouth colony, it would look like, for the same reason—they were prepared to balk authority; everyone else in town stays components of a collective. Yes, they instruct their children how sinful everyone is—what we moderns recognize as a significant kind of abuse—but when we see the family before it gets half-crazed by visible signs of the actual Devil preying upon them, we see no hitting, no sexual abuse; we see instead a good deal of the father talking to his children, listening to them, being soothing but not false—especially notable in his discussion with his son over the limits of human awareness, when their unbaptized child is taken and killed—even if it's only his weaknesses that his mostly grown-up child, the budding, teenage Thomasin, focusses on later in the film.

And about that, about the daughter scolding her father with the truth of his weakness, his many lies and acts of cowardice, boldly enumerating every single instance: how many of you would ever dare the same with your own parents, right to their faces (the director Robert Eggers says he was influenced by Bergman's Cries and Whispers, one wonders if he wasn't as well by Bergman's Autumn Sonata, where the audience is both alarmed and quietly thrilled by the extent to which the daughter shreds through her mother's lies, defying all the unvoiced threats that commanded she never dare air but flattering reinforcements of her preferred self-image.), even if you were in a situation like hers where there was nothing to be lost in doing so. The last film I saw which featured the possibility of such a confrontation—last year's The Intern—had a feminist daughter at the helm of a large company she created about ready to suicide herself if her mother found out what a bitch she actually thought she was. So, yes, the correct perception of them is as actually evolved—products, each one, of considerable allowance, not as the repressed religious nuts that sixty years later (the film takes place sometime near 1630) would be responsible for the New England Witch Trials—those ostensible worst of American peoples.

Indeed, through what happens with Thomasin, there is a sense that the family's destruction and her "moving on" is about using the elements of what they're bound to—the narrative of a folk tale—to do the best impression of a family moving so far forward its lone remaining constituent knows a kind of liberation that can only be represented in the wilds of devilry—an eternity of licentious play and self-discovery, through willing subservience to the Devil. But before getting to Thomasin and how the film binds "witchery" to her own acts of impressive umbrage, almost in a sense forcing her to go perhaps truly pruriently bad in order for her to explore what is most exciting about her, it is important to note that this isn't a film where you simply cheer at the end for the girl being released from family ties and other harsh bonds, ready, instead, to flock about a beckoning undiscovered world.

In particular, you care for the young boy as he bravely seeks down the horrors in the forest, and are abashed that this truly brave young man doesn't meet something he could feasibly handle, something that would give him feedback on how he himself is becoming someone to be reckoned with, as he makes his own moral choices and fights for those he loves (not just to kill the wolf, but his lying to his mother to rescue his father from sustained humiliation), but instead faces an instant great over-pour of a taste—lust—that he had only the slightest previous experience in getting a handle on (previously, his looking away when it dawned on him his sister might be aware that he was aroused at his catching sight of her partly exposed breasts). He was prepared to think he might master a wolf in a brawl (and he might well have), but had no handle on the consideration that lust wasn't something that could only come to rightly own you if it arose in full bloom on your own apparent knocking at its door (hasn't this as much been on your mind, young man? haven't you also been hoping more knowledge of this might be lurking deep in the proximate tangles of the woods?). We also feel tremendous empathy for all the kids as they, in a different register, quietly ask one another if the other is actually in truth with the Devil... there's the sense of the world siblings have constructed for one another, an understanding they have that parents aren't party to, that is touching and inspires our wanting to see kept protected. 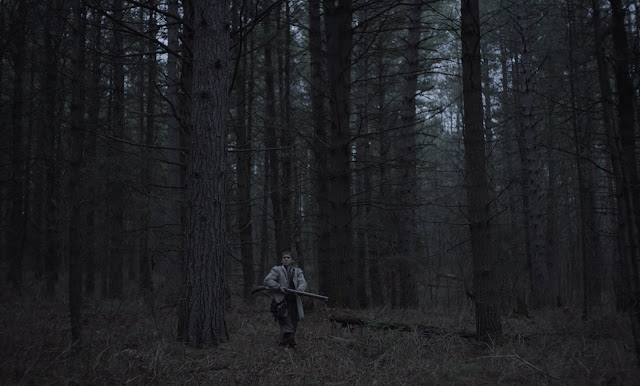 So it's not like when the family gets so torn apart, loyalties irrevocably shamed and broken—as they accuse one another of being the like of either failed patriarchs, wanton whores, and of course, witches and devils—amidst a farmed land that has likewise collapsed as an edifice outside of failure, that there is nothing but rightful allure that awaits her as Thomasin steps into a wild that instead knows self-command, the company of witches. She knows that in addition to being done right by by living unconstrained, loose, and free—"seeing the world," as the Devil says—she'll be dispensing trauma upon families of as just as much worth as her own has been many times to her. But still, it is every time she does what should objectively count most right about a person—their own self-exploration/development—that she becomes bound to witchcraft—so through witchcraft, life must be.

It is when she is fiddling with a game of peek-a-boo, extending the duration she keeps her eyes hidden so that both she and the infant can be surprised with the infant's reaction to something outside of pattern, that the infant gets snatched away. Her brother is raped by the witch just after he gets manipulated (an act of creativity and self-activation) by Thomasin into letting her journey with him on his nighttime "adventure"—itself, an impressive act of self-activation on his part—into the forest. She manages the problem of the twins hounding her, calling her a witch, by stopping her repeated denial that it was in fact a wolf that snatched away the child and instead embracing the concept, unfolding in a moment into a lively, embellished persona ostensibly ready to boil and bake the twins if they should ever reveal her "true" identity. Through all of this, she reveals the kind of personality that would later flourish in New England Puritan communities, as it was from exactly these that America got its first impressive artistic and literary community. 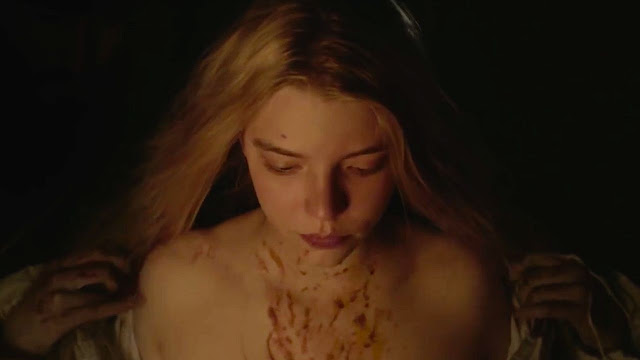