"Inferno's" twin satisfactions: Enjoying the frayed, young mind for romp and adventure, and destroying the radical 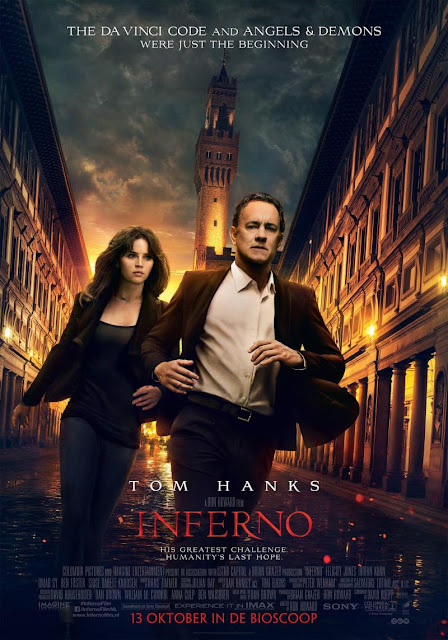 A man wakes up in a hospital room, not sure how he got there, but has a head full of horrible memories, a red-hued hellscape of tangled, putrescent, menacing bodies -- an urban, corpse-filled, blood-filled war zone. A young and beautiful -- it is a nurse?... no, a doctor, attends to him. There is an age disparity, but she knows who he is for his being a famous professor of Dante and for her being someone who has read and admired all of his books. Her name isn't Florence... as in Nightengale, but we find out that's the city he has found himself in.

No sexual interest is ever admitted between them. Nevertheless, very promptly he finds himself dressed in her boyfriend's -- or is it maybe an astray or maybe an ex-boyfriend's clothes, for where is he through all this? why otherwise does he never get mentioned? A perfect fit as it turns out. Simply a sober fact, but on some other planet -- certainly not here! no, definitely not here! -- it might perhaps suggest that he fits neatly as substitute. The next stop is some great Italian museum, where, after dropping everything to thrill at the surprise re-arrival of the great professor, the pregnant matron in charge encourages them to drop the "I'm her uncle, this is my niece" routine and admit baldly to being lovers. For this is Italy, you now, not some place prosaic and unimaginative like the United States.

There is a great deal of adventure. He demonstrates great prowess. Maybe not always athletically -- though we note he does bang up and even smack down people who are basically intense machines of youthful muscle -- but certainly intellectually. In the museum, he looks over a massive work of art with the same sort of brilliant scrutiny that a master military strategist would look over a field of troops. In fact the painting he scrutinizes is of a great battlefield. Maybe anyone who might still confuse him as a harmless Harvard aesthete would be reckoning that if ever there were the need, this guy could morph into being a military officer -- a general -- without skipping a beat. This is a man whom in no way is to be underestimated. Maybe even as lover. She keeps up with him, assists him, even as she's not the scholar he is. They are great team, together fighting their way toward decoding an ultimate puzzle.

And then after three-quarters of a film of this, there is a sudden termination -- no more couple on an adventure. Instead, he finds himself back with someone age-appropriate, whom he ostensibly is just as content with. If there is something subterranean about his relationship with her it's that while they are ostensibly admiring their middle age maturity, being casually accepting of their middle-aged fate -- all its pluses and negatives -- the truth is that they're not middle-aged like other people are middle-aged: there's been quite a bit of eloquent plastic surgery, the removal of creases and lines on their faces, done cunningly, so it takes a moment or two to notice exactly why it seems that they make their almost declaratively bland acquiescence to middle-age seem so ripe and right. This is a minor sin; one you can get away with.

This is the version I saw of the film where it felt designed to appeal to an audience with conscious brains under some strict --note, not apparently Italian -- matron's charge, but with reptilian brains that still crave illicit release. The conscious brain thinks he's enjoyed a film that got the arch-conservative's okay, but the subliminals, the inferred, had their reptilian brains thrilled as if they had mostly dined on sex romp. The other version I saw was not as boomer' indulgence but as an expression of boomers' anxieties towards youth. Not subconsciously realized "youthful" release, but an expression of stern, unconscious desire for alarmingly wayward youthfulness to be curtailed.

In this version, the professor is less... brilliant, and more, established. He is less exertion of brilliant mind to appreciate the new, and more casually combing an already stock-filled brain that could care less if it learned one more damned thing. The point is to luxuriate in what is already known, to demonstrate an actually easy ability to decode that astonishes those without your large body of knowledge. It isn't his vigour which would draw the young, but the fact that he has a depth which must have been drawn out from a longish periods of unstressed exploration, of ease, something unknown to the brilliant young of today, who since day one have been expected to perform expertly and stress uninterruptedly. Because your place is safe because the most brilliant of the young see you with the allure that the centred have over those who are ADHD/PTSD ill-at-ease, you see a future for yourself where you continue to easily enjoy the fruits of tenure no longer readily offered, while they put their shallow-but-high-IQ minds slavishly at work multiplying the discoveries of the like of biological science, which you sense will mostly be affordable to and thus applicable to comfortable people like yourself.

What the young must not do is get pissed off about this state of affairs and turn toward rebellion. It's a threat, because in the process of creating people perennially shocked away from accruing the slow development of a stable core self, you have created a people where it seems plausible they might suddenly mistake someone else -- not you, the relaxed, self-assured boomers -- as pro-offering reassurance and stability, leading to the emergence of an ostensible messiah. And a messiah, a cause, might plausibly make these minds who are furthering Moore's law in exponentially expanding everything known every year (if now more in biological science than in computing science), into those who'll turn their fertile genius towards blackening and corrupting everything known.

These are the young people that have, in your minds, recently emerged at elite universities, who are now renown just as much for ostensibly entangling and tripping up boomer professors with their demands for trigger warnings and appropriate gender assignations, as they are for intrepid scientific advancements. With the young and brilliant suddenly askew, adept workers long-designed for a certain purpose gone "Westworld," you're just as much likely to be assigned as someone, not with depth, but who has long hugged a suspect domain, saturated as it is with sexist, homophobic, ignorant material. In their minds, it becomes not their duty to be the passive and learn from you, but to instantly encroach upon everything you're fool enough to lay out and stake a thrilling claim of righteous protest. You expostulate the fullness of your known world... to discover that you've simply laid out more eternal beauty for the most corrupt of permanent makeovers.

There is a great deal of talk about culling in this picture, and under threat, it seems, are mostly places where a lot of old people hang around and bond with the eternally classic; but we notice that the only people who actually get culled are the young -- all the young brilliants in this picture go radical and die. It's presented as the solution to a pressing problem. We can finally, once again, relax.