"Dr. Strange" won't let its hero sink away from being a showman 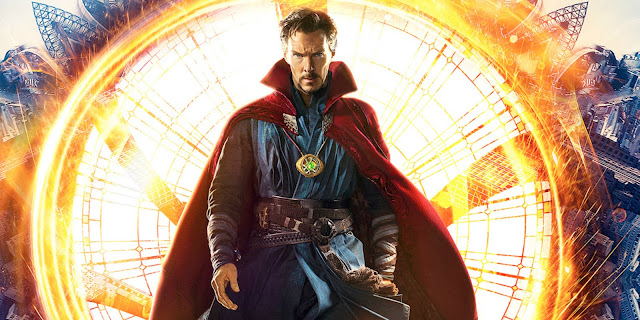 Stephen Strange ostensibly has to lose all his ego, become the opposite of narcissistic, in order for him to become sufficiently powerful in the occult to heal his crash-wrecked, formerly elegant, hands. But if he were to do this, then the new member of the Marvel Universe wouldn't be Dr. Strange, a debonair, cosmopolitan, unpredictable and flashy man of mystery, but rather someone anonymous, who, while still doing some notable and even spectacular things, is dressed in worse rags than even the poverty-stricken Peter Parker had come up with before Tony Stark elevated him a bit. Dish Rag might be his moniker; or perhaps, Okay To Poop On Me If You Want To... Anyway, you get the point: somewhere along the line Stephen Strange has to recover out of submitting himself to absolute humility and allow himself to flower-out again, if he's going to be the strange and singularly interesting person he is in the Marvel U.

The way there it seems is to provide obvious signs that simply leaving one's ego at the door and agreeing to do the drudgery and humiliation of endless constant practice, are the ingredients for a cult where you never evolve out of being the badly dressed serf while a select few are profiting from your slavery, adorning themselves with ample jewelry, colossal homes, Ferraris: i.e. everything you're not supposed to have and are adamant at being permanently divorced from. The head "cult" leader in this film -- the Chosen One -- doesn't go around after hours in a Ferrari, of course, but she does dapple huge in a realm of knowledge that no one is supposed to touch for it being ostensibly the very source of evil things like egoism and narcissism, and comes out of this with no less than eternal renewal, eternal life: the biggest golden goose egg of all! It turns out the Chosen One is doing her own kind of Clintonianism. Rules that apply to "you" don't necessarily apply to her.

Strange uncovers this by going through and mastering some of the same advanced books the Chosen One has. The bait to do this, and to suspect there might be something amiss with how she has been applying her knowledge, comes from the fact of the rather obvious Orwellianism at work in how the cult determines access to power. It's all overtly egalitarian; there is no book, no knowledge, that is permanently off limits. But because some books might destroy you if you're not ready for them, you only get to read them if a chief librarian -- a personage chosen by the Chosen One, of course -- judges you ready. And because the dark arts have been built up as something that can warp even the most disciplined and empowered mind, what this means is that only the Chosen One and a disciple she might choose every few centuries, ever gets to read them. Not a problem, wouldn't be detected, if no one knew these books existed... if a newbie like Stephen wouldn't be likely to stumble upon them. But instead they're forthrightly showcased in the library, communicating something for the newbie to understand. Urging, beckoning, that is, some thought on their part as to why in this place of absolute humility they are yet as decorously dressed as the most ostentatious show-off at a Grand Soiree. Why this incongruity? Why this lack of harmony? Why this counter-factual?... Am I loyal or disloyal to what they want to communicate if I don't blank knowledge/memory of this out?

So, Strange does end up challenging her while others blanche at his  incredible presumption, and you have a sense with his recovered ostensible arrogance that he is going to go his own way this point on, and that it's likely to involve striking adornments like an ostentatious smoking jacket and a more distinguished nom de plume, even if they didn't just mostly drop down naturally upon him as they in fact -- and in the case of the cape, lovingly -- do. Voila! the indelible, scarlet-caped Doctor Strange is born into Marvel's produced film universe! But while it almost seems as if the Chosen One was luring him into appreciating that what he most needs to learn from her involves him making the intuitive link himself... that losing one's ego doesn't mean abandoning one's own judgment and cowering stupidly before some ostensibly perfect master of humility even as she's showing off just how much she actually likes brag, there is something to her overt instruction for him that he must simply practice, practice. practice.

His empowered confrontation with her amounts to practice for his eventual confrontation with the king baddy in the universe -- a mountain-sized head, that lives in an empurpled, psychiadlic realm of blobs, of not four but a magic multitude of something like eighteen dimensions! He goes at this, this epic confrontation, that the Captain America/Avengers series after eighteen or so total movies hasn't yet braved en-totale (or really, even partially) with its king baddy, with even more aplomb that he did with the Chosen One. You really wonder at this guy: all this sorcery that he has learned, and what matters most is that he -- through disposition and practice -- is acclimated to stepping past a hundred different rules, a hundred different hemming-ins, if a situation calls for it. A magic power of an instant summons of Herculean hutzpah! And as the Avengers are killing themselves over who is actually the most selfish and the most destructive to humanity and who less so, it was a refreshing turn of events to experience. The Avengers while they were having fun, rather than drooping dark.

Of course, in this film, no cities actually get destroyed. There are not thousands of innocent human lives lost while titans thundered against one another. All damage done there, gets undone completely. So while the film does beget at the finish its own angry avenger, most of the film feels like its transposed from everyday reality: there's nothing bitter to ferment within everyday human beings because the action happened at a slant away from their existence (Dr. Strange's ex-girlfriend's  -- the surgeon, Christine Palmer -- being the exception, of course). They can have their own life, unperturbed, as Marvel's players frolic elsewhere.

I don't know quite why it felt this way, but the effect of this split almost served as a suggestion that we take our own everyday lives as an encumbrance, which is what normals' own are becoming in the Marvel U. This was my experience. Like we're in the process of taking someone's admonishment to take our play outside and transforming this into a great new liberty. Alright, we declare to one another as we enjoy this newly evolving comic book film universe, from now on our regular lived work lives are "bodies" to be kept in unperturbed regular motion, while our real lives will blossom as astral selves living vicariously in great lush realms of the like of the splendidly Tele-tubby' roundish and Yellow Submarinish' psychedelic purple. Here we finally live; as we exit we become once again, mere bodies in pre-programmed motion. Won't some want to do this even if this decade doesn't turn Trump' dark and remains Clinton' complicated? Avatar's sequals are in the near future. Somehow I suspect that people won't this time be disappointed that they have to return to reality, because for them this will be no more than a return to a necessary part-time somnambulism society doesn't find much meaning in anyway. It's all work robots will eventually be doing, and with more predictable regularity. A fortuitous demotion would have occurred.

Speaking of being perfectly invisible... One does note that the great accomplishment given so much due in this film -- humility in service -- is actually most admirably actualized by Dr. Strange's cape. "It" seems to know exactly how to properly allow Dr. Strange the lead, while nevertheless not refraining from offering advice -- choose that one! -- and even strong admonishment -- no, god damn it! I'm not letting you go there! It'll be your ruin! Subliminally, if in this show of ostentatious show, people walk out of the film strangely thinking of being more subtle and selfless, it'll be, I think, not owing to anything we've been directed to learn from but from the efforts of an ostensible accent. Perfect development for a film about a Marvel character who isn't simply 'vested in performing his equivalent of the dull Hulk smash, who lets us admire the treat of garnish.