Discussion about a Macleans magazine article on Trevor Peterson, on Facebook

This is such a concise summary of what makes him so laughable. 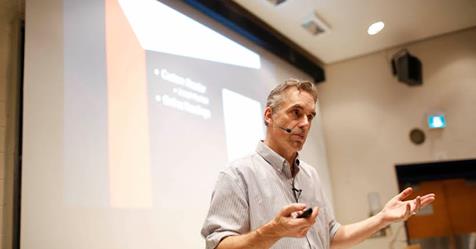 Patrick McEvoy-Halston But many university professors and students are at work undermining works that are a source of pride to a lot of Westerners. Historically situating texts, applying trigger warnings to many of them, often feels like set-up so that when an even bolder generation of profs and students come around, they'll be easy for wholesale dispatch. And if they're deserving of this rejection, good for them! Texts of the ancient Greeks are replete with justified rapes... and this is something we have to forever acquaint ourselves, because? The ambition is not minor, even if the effects so far are. Many people believe that something they depend on for their equilibrium is being badly unsettled. It is. Only, it might very well be good for them. Nations must be forever reified, because?

The article pulls away from calling him a neo-Nazi. I don't know why. He betrays every sense that he's a Trump who makes outlandish statements, which creates a breach from where other thoughts of a similar kind might now feel permitted to enter, and then pulls back so he's more decorum. He knows the public senses that a breach has now been made, permission has been granted to become more assertive, and he pulls back only so that the public has time to accommodate itself to its new "strength." When they're ready, when the public is ready, he burrows back again to his more regressed position and once again leads with that, since its now safely mainstream. There's a coward in him, is what I'm saying.

We need to get prepared for him to win, however. This article assumes that anyone who listens to him for 15 seconds understands him as inane, but in a recent interview I saw with a very literate Brit, at one point he had her completely stumped... she felt that something was very wrong with what he was arguing, and there indeed was, but had a very hard time coming up with a rebuttal. She hadn't prepared herself for him, mostly because many on the centre-left haven't prepared themselves for the fact that Jordan Peterson's voice is also the voice of their parents -- or from this article, from their quasi-predatorial, presuming "aunties" -- and they're feeling this call back to heritage, this stern call back home, too. Temporarily, to banish away this thought, we poke easy fun of him, as this article does, or just dance away from him, calling him evidently inane.
2
Manage
LikeShow more reactions
· Reply · 1d

Jane M.  I agree with almost everything you've said. Although, I think the whole point of the article, while somewhat tongue-in-cheek, is written not because Peterson's inanity is glaringly obvious, but quite the opposite. For someone who speaks and behaves as though his ideas are self-evidently true, it just takes a little bit of digging into those ideas to expose their frailty. And to your point about Trump, he (however consciously or not) uses the same strategy of delivering his message with unshakeable confidence, and that is a huge part of what resonates with his audience. He is openly defiant of reality and encourages confusing messaging, doublespeak, and spectacle to distract from the fundamental failure of the arguments being presented.
1
Manage
LikeShow more reactions
· Reply · 16h

Jane M.  Whereas Trump's special brand of smokescreen is... let's call it locker room talk. Rough language that doesn't exceed a 4th grade reading level. Meanwhile, Peterson also couches his arguments in language meant to dazzle and obfuscate, but he does so by going in the other direction. Peterson overcomplicates his language, like his words are a labyrinth meant to trap his unsuspecting opponents and followers alike, and this opens up a whole new demographic of listeners. While Trump's audience are uneducated and racist, Peterson has attracted and groomed a base of educated bigots (geez, talk about an oxymoron), and while there is SIZEABLE overlap in their audiences, they played a big part in rallying that audience together.
2
Manage
LikeShow more reactions
· Reply · 15h

Jane M.  So I think the article was serves as a way to arm the audience against his intellectual dishonesty and the dazzle of his cult of personality by exposing his schtick. And while it may not change the mind of someone who has already drank Peterson' kook-aid, it can make sway a more tentative follower, or more importantly, someone as of yet unfamiliar with Peterson who would have otherwise been vulnerable to possible manipulation.
1

Patrick McEvoy-Halston Well, I do hope it does that. I think it might aggravate some of her supporters, for being a bit too casual with something that looks like it's going to overwhelm us. We can't pretend it's 5 years ago anymore, where we completely held the field and could casually count people as trolls and laugh at them, without any fear they could ever reach up and strangle us. Now, many of our own are turning against us, and we need a new battle plan that fits our current situation. The Right tags us with this... that we're so used to holding the field that we're not used to really having to debate our opponent's ideas. There's some truth in this.
Manage
LikeShow more reactions
· Reply · 12h
Jane M.  Totally. I'm not advocating coming from a place of condescension. I'm saying that in the face of his self-importance, and the insidious banality he wraps like sheep's clothing around increasingly radical right wing talking points. So I appreciate the levity that says "Hey, listen. We're not just going to pretend the emperor has clothes on." Jordan Peterson knows exactly what he is doing. Maybe he didn't at first, but as soon as the money and the pseudo-fame started to roll in, he caught on pretty quick. He's a bad faith actor.
Manage
LikeShow more reactions
· Reply · 9h

Jane M.  Sorry, I'm writing this on my phone and editing is hard.

Patrick McEvoy-Halston If I may, and just fyi, here's one of the ideas the article writer must have thought one of those which appear evidently inane after a very brief period of consideration, because it's the one Peterson is mostly known for, getting revved up on twitter tonight, on Peterson's side. From Andrew Sullivan at NYMagazine:  http://nymag.com/.../sullivan-metoo-must-choose-between...Manage

Sarah Q.  I think that article is highly problematic, Patrick. Although theoretically it would be good to acknowledge biology, humans are far beyond the point of behaving exclusively according to biology (c.f. clothing, constructed shelter, culture, etc.). If sexual aggression and the suppression of one gender is part of the "nature" of humanity, then I am all for ignoring biology and doing our best to live with justice--certainly not a natural concept.
2
Manage
LikeShow more reactions
· Reply · 12h

Patrick McEvoy-Halston Sarah Q.  I'm not with Andrew Sullivan, though. I didn't post him to reference my own point of view, but to further illustrate that Peterson's ideas are not going to viewed as easily discernible as inane, by a lot of smart people. Sullivan is influential. My own position would be that if all the emotionally healthy people, that is, the most emotionally well-balanced, the most truly biologically fine, have been ignoring "nature" for 30 yrs in preference to gender, Sullivan should have paused longer to consider the probable fitness of the argument, and worried more about bringing up an argument for "nature" that in this new environment, could well crush it.