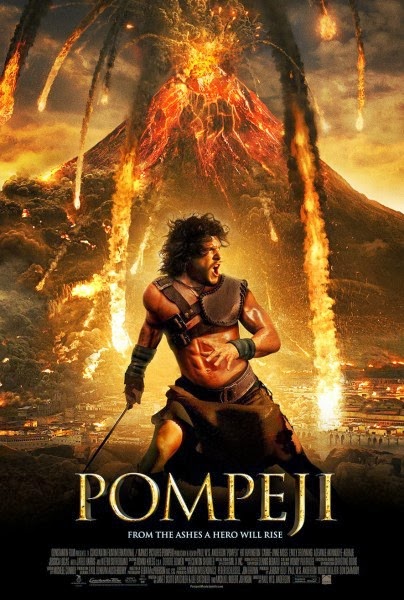 You wouldn't always readily assume a movie about the eruption of Vesuvius that destroyed Pompeii, would necessarily be a "Noah's Arc" story -- about "God" finally having it up to here with the decays of spoiled mankind, and abruptly calling "Cut!" I know it's advancing toward second century AD, and therefore somewhere near the vicinity of where most of us would start looking for advanced moral decay in the once-great empire, but it'd of had to have been fourth or fifth for us to think of it as so far out on the precipice we might even feel sorry for its inevitable coming savage plucking apart. However, Paul W.S. Anderson just advances along as if the Roman Empire was Caligula -- barely even a shell of virtue over grandiose evil -- and it feels about right for our times.

I was feeling sorry for Pompeii, for owing to our current predilections the poor dear was going to be ripped apart by an angry overseeing Vulcan god as well as by a representative of all the peoples the Roman Empire had waylaid to amass its claims. The volcano's just a reminder that even a great civilization can instantly collapse if Nature just shifts its resting position some -- "I'll just shift here rather than there, even as my -- to me -- innocuous resulting bed-folds rearrange some of your cities so they are no longer there." And the hero Celt, that a civilized person can't even be seen if he's caught out making his case within a barbaric culture's worldview -- the senator might as well have acted in the savagely evil and manipulative and hand-rubbing opportunistic manner that he does, for that's the only way he was going to get to be "taken." Nature, impatient at the "bug" clung at its hems, matched by a return of the repressed in the advancing Celt demon … poor dear, about-to-be-succumbed, Pompeii!

The senator at one point is shown digging through his intelligence to contrive some surprise to foil a bad position he'd been told he'd been pinned to -- his using the sudden manifestation of the volcano's tremors to mean his sparing the Celt was not quite his personal decision, nor his being outsmarted and being at the heed of his "wife," but just reading off Vulcan's decision: the mob, that is, might have to abide a thumbs-down decision in a subsequent match if, for example, with a quietened mountain, the Senator made the choice more his own or, say, power-jealous Jupiter's. And the city of Pompeii had one too, one possible miraculous surprise it might hoist to its defence upon the advancing sure-footed spoils of lava and heat destruction -- one that historically has been good to quieten or balk back some, Roman Empire-haters. It's still a realm of Law, and if for example a gladiator can make it through the slog of fifty or so fights, the most powerful senator would be besmirched if he, just on whimsy, decided to deny him his freedom. Law, polished columns, paved roads, order, and all stout Roman philosophical thought, would hence all dissolve into meaningless confluent, without a batch of lava or an advancing barbarian horde needed to assist. The founding principle would just have been removed and cast aside as casually as a bone from a well-cooked sleeve of meat.

Stout defender -- Law -- arises into the movie fray early, and with some of the confidence he'd earned -- the veteran gladiator is absolutely sure that if he wins his last fight, he's a free man, for it's all-abiding Roman decree. It's not said in quite a way that would have us doubt the Celt's retort that, essentially, this long-time Roman denizen knows nothing of Roman ways, but it doesn't quite exactly seem delusional, either. For a moment we have to estimate if the movie really has in mind to surface one of Rome's normally unquestioned virtues and with nonchalance expose it as a simple con. Maybe, for example, the veteran gladiator will be slain before his last fight -- some contrivance like that, that shows that a powerful man might scurry around the law but not flaunt right in its face.

But Law is in fact dispensed in the movie as ephemeral, and the only thing the Roman Empire has going for it is that some few of its constituents, here and there, do abide themselves some true care between family members. There are spots of love dispersed about the place, but it would seem to have nothing to do with the nature of the makings of the civilization that contains them, which in fact is better exposed when they still take delight in the prospect of more outrageous growth -- more money for even greater spectacle-machines than they already possess!

So Pompeii has to be bruised up by two powerful arms, and I think it feels almost as if Vesuvius recognizes the Celt as its adjacent, for the tension that seems owed in the film that does not in fact arise, feels as if owed to Vesuvius having to accord the particular claims of its ally before he's allowed to devour his full share. Specifically, no aspect of a drama involving the bullied weak gaining complete victory over the oppressor, of lovers meeting and falling in love, of a man refusing all friends finally acceding to proclaim the one man who's earned it his full brotherhood, is really interrupted, even with a heaving behemoth volcano being the one required to somehow temporarily stifle or discipline its pressurized, bulbously amassed flow. The evil senator isn't dissolved into magma before he's had full chance to be magnanimously evil, and not, as well, before several matching of arms are staged -- so interest in it is totally satiated and satisfaction of conquest is all that belies on the horizon. The lovers don't find their preparations to be bonded together persuasively for all time, stifled by the kind of stray rock that stayed the gladiator owner's attempt to successfully leave the city by sea (and doesn't it seem, since he guesses before anyone that Pompeii is in for it and immediately prepares for departure, to unjustly take him forever to get out?) Heck, not even the fight between number twos is allowed to go off course, since it would mean an ally gladiator not cementing his position as maybe about equal in skill but -- character-revealingly decisively -- far greater in resolve and moral grounding to the greatest professional Roman soldier in the land.

There's a great gladiator fight. The Celt and career gladiator take on everyone. But they climb a monument in the centre of the ring and from it topple down a column of rock as well as numerous missiles onto those at the base, wiping out surprised hordes. In this, they're simply a presage of Vesuvius's preferred battle tactics. They anticipate even Vesuvius's sea assault, with their strung chain, stretched between the centre monument and the horsed Celt, wrenching lines of men off their feat, a match for a tsunami wall doing the same to Pompeii's array of fleeing ships. These two forces really administer their umbrage in quick succession -- the massacre in the ring is followed immediately with the Volcano no longer restraining itself upon the city -- and so goodbye to the coliseum that enclosed it! -- even as they seem to admit in their quick sequential kiss together that ultimately, while jointly interested in taking down "Rome," their ultimate interests may not not require one to cede ground to the other.

I doubt that strewn Pompeii cares, for even with the Celt ceding the importance of Vesuvius's narrative -- total, inescapable destruction -- over his own -- which, being "the dangerous barbarian invader," after all really should follow a few centuries' hence -- means he shouldn't be allowed to gallop safely away, his being ash-encased in a tender lover's embrace means there's now no way all those previously compelling Pompeii encased won't be all but mislaid and forgotten. Imagine, if you will, if archaeologists … if we, had stumbled upon them! It'd be iconic beauty -- them -- and the beast -- Vesuvius, with all the rest but a crumple of imperfection rather than what astonishes for its astounding unexpected claim on perpetuity. 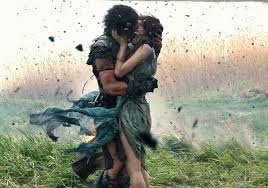 February 05, 2014
This is how Lupita Nhyong'o describes the shooting of the whipping scene in "12 Years a Slave":  And being there was more then enough to handle. "The reality of the day was that I was stripped naked in front of lots of people," Nyong'o said. "It was impossible to make that a closed set. In fact, I didn't even as for it to be a closed set, because at the end of the day, that was a privilege not granted to Patsey, you know? It really took me there. It was devastating to experiencing that, and to be tied to a post and whipped. Of course, I couldn't possible be really whipped. But just hearing the crack of that thing behind me, and having to react with my body, and with each whip, get weaker and weaker …" She grew quiet, and sighed. "I mean, it was -- I didn't practice it. It was just -- it was an exercise of imagination and surrender." Lupita was trying to become as close as she could to the actual Patsey, out of fidelity, apprec…
1 comment
Read more