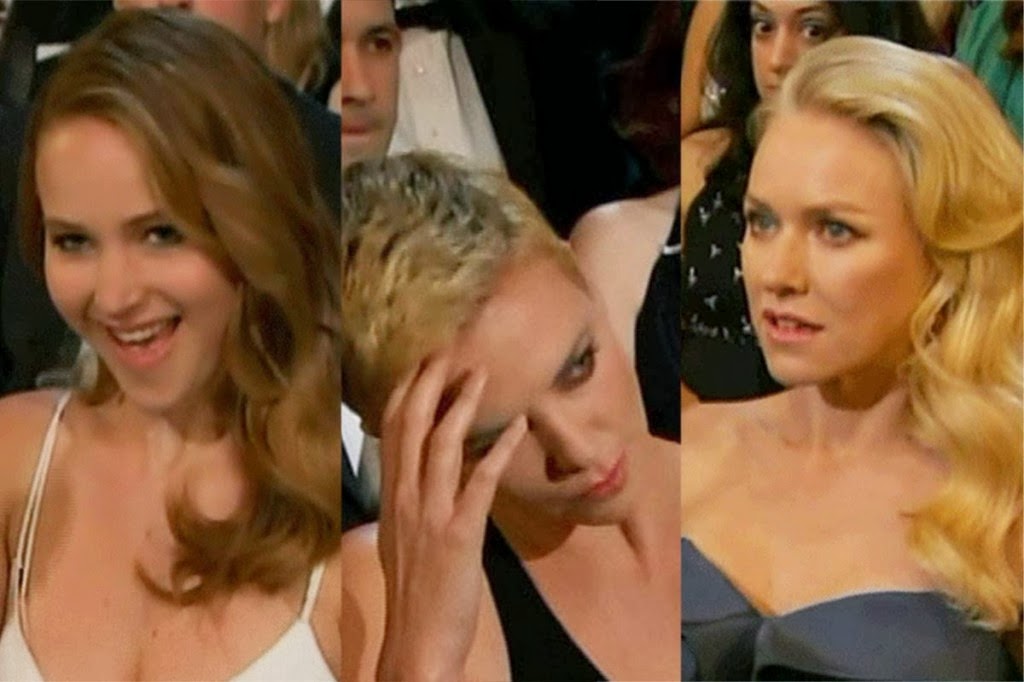 I think we're mostly familiar with ceremonies where we do anointing. Certainly, if we can imagine a context where humiliation would prove most devastating it'd probably be at a ceremony where someone thought themselves due an honor -- "Carrie," "Good Fellas." "We labored long to adore you, only so to prime your hope, your exposure … and then rather than a ladder up we descended the slops, and hoped, being smitten, you'd judged yourself worthless protoplasm -- a nothing, for letting yourselves hope you might actually be something -- due to be chuted into Hades or Hell." Ostensibly, nothing of the sort occurred during Oscars 2013, where the host, Seth Macfarlane, did a number featuring all the gorgeous Oscar-winning actresses in attendance who sometime in their careers went topless, and pointed this out to them. And it didn't -- not quite. Macarlane would claim that all obscenity would be directed back at him, for being the geek so pathetic he holds onto the fact that an actress once bared herself as fact that he's got advantage over them. But he's wrong here, because when an age comes to access working-class-assessible careers where people thought they could use them to hoist themselves into some superior strata, as almost a stigma that instead defines one forever, the kind of punishment they begin to bring out to punish those who presumed is to let human shit know these women are so caught out they're theirs for spoil … the basest gain ruin over the once-Goddess, so a changing-of-the-guard is indubitably recognized, and by all given heed.

It didn't quite happen here because all of the actresses "caught out" were not really gelling parts of today's assembling film lexicon  -- who they are has long since been established, and we've no real interest in tempering how they're fixed in the firmament. We hope only they felt a threatening shudder that would stop them from stepping outside of where they know they can daunt people to try and intrude on our current purposes. They're actresses who became Oscar-winning actresses, the living reified -- fine. But that's a path now closed. The one we were mostly talking to was Jennifer Lawrence, an actress blossomed today. She cheered the fact that she hadn't ever gone topless, but the truth is it really wouldn't have been that that would have damned her. What we're hunting for is presumption, those who'd ride rickshaw over us while they'd claim glory; and she's proving the typical actress these days whose presumption seems low even as they lead major films and make millions … with them so sorrowed, in fact, you might even feel prompted to rush up and lend them support.

David O. Russell was willing to risk seeming insensitive when he likened Jennifer Lawrence's workload in the "Hunger Games" franchise to that of a slave out of "12 Years," so to gain more attention to her genuine plight. He argued she was on a "hamster wheel," with artistic films -- still more work -- her "vacations." He was widely ridiculed, but what he was saying comports with our sense of her as doing her best to be within the imaginative grasp of everyday people -- hard-working to the point of being self-sacrificial, couch potato at all other times. Existentially, she's not using roles to claim a greater stake in the industry -- director, producer … institution -- but just once more glad to be working in interesting projects, especially with so many others out there struggling or making due with much slimmer offerings. Her type are like Chris Hemsworth, who despite being a franchise was told straight out, "Chris, take your shirt off," for a blatantly gratuitous scene in "Thor: the Dark World," and complied to please the boss.

Actors, that is, are in a sense become quantitatively different from one another in what the industry feeds them, but not qualitatively different. This may seem absurd if we see a return to Golden Age of Hollywood scenario where a select few stars and starlets range huge, but it would still make sense in that these are still not actors who claim what their predecessors once did -- Mary Pickford-like freedom; an ability to stake control, so shaping an industry to their wills. Their image may be everywhere, but studios will own them … something they evidence like majestic, spirited dogs strangely drawing so much attention to the fact that with all that they're still leashed, by admonishing themselves in how their careers advance, and who they end up dating.

After Macfarlane's dramatic exertion that compliancy of actors will be asserted from both above and below, I began to think of actors as tremulous … as "Wizard of Oz"' Dorothys, where each foray into a film requiring a brave step because psychic chunks might be taken out of them and they might dawdle into their subsequent picture nowhere near reset. Certainly fall film discussion was a lot about two of them, two Dorothys, in deeply trying contexts. Adèle Exarchopoulos in "Blue is the Warmest Colour," had talked about how brutal and punishing the filming was, and judged herself as having gone through the trials of a prostitute; and Lupita Nyong in "12 Years a Slave" had talked about letting herself be completely exposed, to dissolve walls and let herself be "availed to trauma over and over again," as she prepared for a role where she'd/her oft-raped character would have her flesh rendered from her for the sin of pride. Both actresses have been feted repeatedly afterwards, but is this owing to their acting, or because while we were closing in on wanting films as officious ceremonies wherein subject actors allow themselves to horrors, they were like puppets of our wills, experiencing whatever may be and availing only trust in authority or later public acclaim to soothe their nerves? Are we feting them because they are little girls who placed their hands in the fire, even kept them there, as the damage became ridiculous, only because we cued them to do so?

As Lupita Nyong articulates, "our jobs as actors is to lend ourselves." And we noticed, and loved that they did so -- with her ostensibly okay afterwards, and Adele, maybe still not quite so much.

February 05, 2014
This is how Lupita Nhyong'o describes the shooting of the whipping scene in "12 Years a Slave":  And being there was more then enough to handle. "The reality of the day was that I was stripped naked in front of lots of people," Nyong'o said. "It was impossible to make that a closed set. In fact, I didn't even as for it to be a closed set, because at the end of the day, that was a privilege not granted to Patsey, you know? It really took me there. It was devastating to experiencing that, and to be tied to a post and whipped. Of course, I couldn't possible be really whipped. But just hearing the crack of that thing behind me, and having to react with my body, and with each whip, get weaker and weaker …" She grew quiet, and sighed. "I mean, it was -- I didn't practice it. It was just -- it was an exercise of imagination and surrender." Lupita was trying to become as close as she could to the actual Patsey, out of fidelity, apprec…
1 comment
Read more