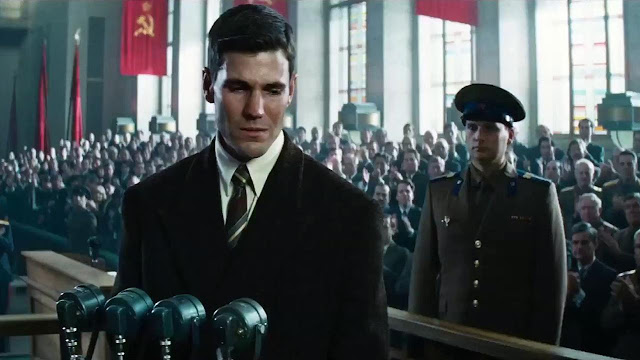 Bridge of Spies is a film which salutes competence, canniness and experience, and as such it leave the two young Americans caught out in Russia and East Germany, out in the cold. Tom Hanks’ James Donovan is a newbie spy, but it turns out his genius in negotiating insurance—where he reframes an incident where a multiple number of victims might potentially each file a claim against his client so that it's justifiably only one claim against him—is perfect training for negotiating an exchange of spies, where he also brazenly and successfully insists that there aren’t two deals on the table but rather only one: two young Americans for their one caught senior Russian spy. The film begins with showing off Donovan's competence, and we are meant to remember it later when gets over the brief initial hump of feeling a bit unprepared for his new undertaking. It also begins by showing off the senior Russian spy’s: when the CIA have barged into his apartment and surrounded him—when the game is up—he dazzles by nonchalantly figuring out means by which still openly displayed, acquired top secret information can still be disposed of. Specifically, he merges the paper the information is on in with a cloth the agents have agreed to let him use to tamp down his painting, thereby saturating it with enough paint that it is unreadable and likely undiscoverable.

We remember how the Russian spy reacted, how he ultimately fulfilled any mandate required of a spy after being caught, how, however much his country may not have deserved his loyalty they nonetheless had themselves quite the agent, when we attend to how the Americans comport themselves when they were caught. One of them was supposed to destroy his plane, if possible, and for sure kill himself if ever caught by the Russians. And however much Spielberg may think he’s encouraging our being in this young man’s favour by showing how valiantly he attempts to press the spy plane’s self-destruct button after it’s hit by a missile, we think more rather on how, unlike the Russian, he just plain failed to do what he was supposed to—twice: it’s passed over, but clearly he didn’t prick himself with his cyanide-laced needle either. The other young American is shown gallantly returning into East Germany, even as the wall is almost constructed, to retrieve his girlfriend. But his effort, upon return to the wall, to talk his way through the guards involves him explaining to them that he’s ostensibly of no concern … because he’s an American who’s only been staying in Soviet-controlled Germany to do PhD studies on Communist economics. As they seize the Phd thesis he carries in his sack, he says something to the effect of “wait, that’s my only copy” … and we’re thinking he might rather ought to have tried dropping the whole damn thing in the mud and leaving it behind some while ago—some version of what the Russian spy would have done—rather than risk being caught out and have to appeal this ignorantly and clumsily for empathy.

The way the film prejudices youth (there’s another notable incident, involving a young Russian spy that is made, owing to his naivety, to be Donovan's patsy) as somehow guilty just for being those who can so easily be caught out, reminded me a bit of Casablanca, where the young couple Rick rescues from resorting to measures that’ll taint and even destroy their marriage, exist mostly as means by which Rick himself can be inflated in our eyes—what a good guy! To be naive and innocent, in an environment where there are one thousand and one clues that this is the last thing you can afford to be, actually disavows one of empathy: means you’ve earned your fate, and are probably supposed to be ruined and perish. The film, then, does not quite remind me of its era—the late 1950s. For the years where the smart-talking lawyer or savvy ad-men seemed the ultimate embodiment of an era were about to close down very quickly, and be replaced with an era of dramatic experimentation and social change where it is to your advantage to be young and obvious about it.

Rather, it reminds me of today, where if you’re going about life thinking that it is endlessly forgiving of missteps or experimentation, you’re impossibly naive: for evidence everywhere suggests it isn’t. Post something on the internet, it’ll be dug up by bosses, landlords, future lovers, be sure, so it had better be banal or reflect widely shared tastes or opinions. Get a few mediocre grades in school, you’ll never recover and be exempted from all the prize colleges, so go for the sure thing and don’t experiment. Say something averse about your government, the NSA will take note of it—so take care you don’t seem in any other way an alien, or they’ll be down your door. You had better be careful, and if you’re not, it’s your fault because it’s been this way for so many years it’s beginning to seem like it’s always been, and you should really have known.

This is the first film I’ve ever seen which featured the division of Germany into East and West, where it didn’t inspire nightmares of being the hapless person who found himself trying for the West just after the wall was finally in place and was no longer an option—aaarrrgh! if only I’d gotten there a half hour before! The reason I think is that you have a vision of the drastic difference in the kind of life that would unfold for one if one actually made it across to the West—all that freedom and ever-accruing self-development—and it’s almost impossible to imagine one handling just now, so the possibility of being stuck in the East would actually be a bit easing. Caught out in the West would involve a life of truly unlimited potential, but would also involve incurring the sense of abandonment one experiences when, via your own self-attendance and independent growth, your parents see everything you’re up to as massively disrespectful affronts and turn away from you. In the 60s, youth could do it, somehow, for all the social change they fought for left them strangers to the generation before them—mommy and daddy would never adjust, never understand—and they never as a result of this just fell back into line: instead, they incurred the abandonment depression and let them go, buried the Depression and War past and made a new and glorious future for themselves. But now, lacking the benefit of following the kind of massively sacrificial period that enfranchises an extended follow-up period of youthful play and entitlement, that would be way too big a thing to try and manage. No God, no natural law, no strong current, no way of things, no evolutionary principle, is with us.

And with it just being us, being out into the future, with our parents shutting themselves to us, and no large and menacing state apparatus to interject them into, would mean having to fight a perpetual sense of rejection and abandonment that would stop us, even if we know the world we were leaving behind the very opposite of Eden. What we never admit about this NSA/Orwellian world is that it’s an environment we curse but are psychologically invested in maintaining. For behaving as if we are being watched, curtailing our life in recognition of its power, means communicating that we accept its adverse presence as nevertheless a certainty … and feel thereby that our parents will stick with us, even as they look over us, way, way into our adult lives, like omnipresent elves on the shelves. We may live our lives in an East German kind of fear before the intrusive parental state, but we’ll never feel forlorn its interest in us, which means our evading a much more apocalyptic sort of fright.