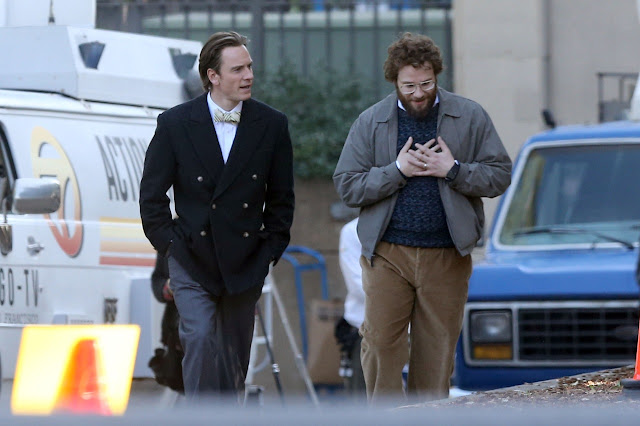 The film begins with 50s footage of the futurist Arthur C. Clarke predicting that at one point what were then only gigantic, takes-a-warehouse-to-fit-one computers would become so small that every home would have one. It’s clear he’s envisioning big things from out of the this titanic diminution in scale, but from our vantage point, with him speaking as one coifed in 50s “grey flannel suit” style, speaking within 50s big corporation society, we might not be so sure he is. If everyone has a personal computer at home, but only in home offices, where their routine seems about the same as it would if they’d commuted to work at General Electric, or Proctor and Gamble, or IBM, or whatever — what change, really? If it enables everyone to be a work drone in corporate culture, subsumed as a distinct person to the greatness of one’s company, regardless of where one lives in New York or in some remote rural hell, how empowering, really? Giving everyone easy access to the kind of computing that once required a military budget to acquire, and a similar largess to house and power, would be revolutionary only if advances in technology were accompanied with advances in what kind of person, exactly, we would collectively allow each person to become. Allow someone, whether at work or at home, to fully self-actualize, and then, yeah, making it so that each one has gone a toolkit that can keep up with their inventiveness, and then some, could readily be the thing that makes a spark of inspiration go supernova.

The creators of Steve Jobs—by which I mean mostly the screenwriter Aaron Sorkin, whose influence on the film is primary—clearly are under the delusion that their film demonstrates that Steve Jobs was the genius who enabled an era where 60s rebellious individualism was finally met with technological advances that could enable even the most remote and or trapped person to transcend their situational difficulties and blossom. They clearly believe he stopped the like of IBM and Microsoft from having such unchallenged success, it would curdle the undeveloped artist in everyone—what right have you to be doing art on a machine and operating system so reminiscent of business and military and government that it would consider any such both childish play and an irresponsible waste of resources? Thanks to Jobs, the movie creators are under the delusion they are conveying, each one of the empowered artistic individuals associated with the Apple brand — the likes of Dylan, Einstein, Joan Baez, John Lennon—could have more rightful peers than one would think possible, as what looked like would be a machine age that inflated only the tech geek and business school graduate gets taken over sufficiently to be just as much one where the artist in you gets empowered.

What the creators actually are doing by referencing all these recent, massively creative and rebellious individuals, is creating not a vision of something massive, complex, and everywhere sprouting—a hippie garden—but a Mount Rushmore that looms over everyone, with room only for one or two more: one of these indisputably being the great visionary, Steve Jobs. What the film thinks of those who’ve grown up under his influence can be seen in its exploration of his daughter, who represents the very first generation who would grow up with personal computers. Early in the film his daughter uses his new MacIntosh computer to make an abstract, featuring, in particular, one “drawn” line that squiggles upwards on a diagonal path. Jobs looks at the picture and is not shown to be drawing on his own fascination with angles and lines to consider what his daughter might be expressing. Instead, he is thinking that she is proof that his dream that a generation could grow up knowing computers as a tool they can use without in part kowtowing to, and as primarily a device for artistic self-expression, is possible—it was the first thing his daughter thought to do with the unknown device. The extent of self-actualization his machines help enable is not as much on his mind as is the possibility that people like her, counting in the eventual millions, will help make a future that is much more pleasant to be amidst. They’ll be agents, in a sense, of gentrification, where the point is not for them to actually be unique—which would bring about the unpleasantness of a highly variegated human landscape—but uniform in a pleasing way: overt bullying by a cold corporate order would have to be lost. You could endeavour to get to know each one individually, and in pretend earnest, but really it’s appropriate to count them together as a conglomerate and see about one the like of a bustling metropolis, full of ostensible “bright, young creative minds,” over a previous landscape that had once threatened monolith cold parental refusal or, with its aesthetic obliviousness, a reflection of one’s own imperfection. His once welfare-dependent, emotionally-astray-mother-raised daughter gets into Harvard, and writes for the Crimson, and you realize just the fact of this was so close to be encapsulated as a perfect development for Jobs, it would allow him to block out if reading his daughter’s writings startled him with the discovery that she was actually idiosyncratic … couldn’t be assumed; would take awhile to know and might prove intelligent but truly abrasive: portends a future that is truly unaccountable.

He doesn’t in fact read her papers, and it’s likely she couldn’t overcome the giant will of people like him to develop idiosyncratically anyway, and rather just be someone who in being generic Harvard with a preference for Apple products and an abhorrence for imperfection, would please a generation who arose out of every possible sundry place of origin, that their human byproducts removed them of taint of origins. The fact that their children are actually boring, easy to accurately assume, is what this still insecure lot wants: for dull gentry reads as practiced, long-established gentry—long hewn into perfected form, so they’re safe from drawing on anything astray in one’s makeup to shift one from out of one’s class.

The film argues that Steve Jobs helped bring back 50s uniformity of personality-stifled souls, but in such a way that an ostensibly individualism-touting populace could deny having occurred. Those who rebelled against branding, and were genuine about it—and therefore as I will discuss, truly interesting—created youth who couldn’t or wouldn’t figure out their way out of getting destructive narcissistic satisfaction out of their attachment to brands, likely for fear of being rejected.

But if the film suggests it likes the idea of creating a breadth of progeny that aren’t troubling, that are actually stifled and controlled, and so life, the future, can more readily just be assumed and appear like a classically ordered garden before one’s balcony, for oneself, the film thankfully instructs, the ideal is still to self-actualize enough that you are as interesting as the great leaders you associate with. In this film, Jobs is not shown as someone who of course needed other people to realize his dreams but who were, in total fairness, compared to him actually only the discardable “B” sort of personnel he claims were responsible for the engineering of the Apple II. Rather, each one of them is played by a significant actor and made to be absolutely riveting in their conversations with Jobs. There’s a weight, real gravitas, to each one of them, and one senses at times the film playing at the idea that what truly makes Jobs “great” is in part still our not-entirely-shed human need for human titans, rather than the pure simple fact that if certain people like him hadn’t been born, the future would have been significantly lessened.

The film is so interested in the Apple CEO, John Sculley, wants to credit his significance, wants to credit him, for instance, it even plays with denigrating something that might feel as a still-broadly-needed foundation myth by not glossing over the fact that during Jobs’ absence, Sculley and chief engineer, Wozniak, put their resources into a product that really in retrospect comes across as astoundingly visionary: specifically, the Newton—an iPad, but twenty-five years too early. To keep Jobs still seeming singularly necessary and visionary—the sense of them we still overall want—it suggests that with Jobs, Apple would have gotten a modified early iPad that would have enabled people to make use of the product then, rather than only recently. But while we accede to this unlikely vision we don’t forget the film’s play of giving a scandalous amount of credit to those other than Jobs, and that it wanted to do so because as human beings, it is capable of finding them, like it does Kate Winslet’s Joanna Hoffman, Seth Rogen’s Steve Wozniak, Michael Stuhlbarg’s Andy Hertzfeld, very near as interesting.